BEST OF ANDALUCIA: BEST PLACES TO VISIT IN SOUTHERN SPAIN

Best places to visit in Andalucia

You are thinking of visiting the south of Spain and now you are wondering where to go in southern Spain?

Yes, that’s all Andalusia! And Andalusia is one of the best Spain destinations.

Want to see the best of Andalusia? Want to visit the best destinations in the south of Spain? Want to experience true Andalusia?

The next 10 places in Andalusia cover not only southern Spain cities but also famous white villages (pueblos blancos). Undoubtedly, Seville, Granada, Malaga, and Cadiz are some of the most beautiful cities to visit in Spain. But traditional Andalusian white villages are must-sees in Spain too.

After reading this post you won’t question anymore what to see in Spain and where to go in Spain. The answer will be obvious.

You can’t travel to southern Spain and not visit Seville.

Royal Seville is the capital of Andalusia, a top tourist destination in Andalusia, and a must-see in southern Spain.

Seville is the hometown of the world’s largest Gothic cathedral  – the Seville Cathedral and the seat of one of the most extravagant royal palaces in the World – the Alcázar of Seville.

To feel the spirit of royal Seville means to visit Real Alcazar Palace and Gardens, to climb the graceful Giralda tower of Seville Cathedral for splendid views of Seville, to walk the magnificent Plaza de Espana, take a break in the captivating Parque de Maria Luisa, and in the evening to head to the vibrant neighborhood of Triana for toothsome Andalusian tapas, and watch the best flamenco in Seville.

But the best time to visit Seville and to see Seville in all its glory is during two events: Semana Santa (Holy Week) and Feria de Abril (Seville Fair).

During the Holy Week spectacular religious processions go through Seville for a week, and during Feria de Abril Seville celebrates the joy of life by socializing, dancing, eating, and drinking for seven days.

Best things to do in Seville:

Where to stay in Seville:

BUDGET: For You Hostel Sevilla – is a fabulous hostel in downtown Seville. The hostel is in a beautifully renowned 18th-century old house. It offers both private and dormitory rooms.

MID-RANGE: Puerta Catedral Indias Lofts – is a wonderful apartment complex in the heart of Seville and within walking distance to all famous Seville attractions. The apartments come with the best views of the Old Town of Seville.

UPSCALE: Hotel Casa Del Poeta – is an exceptional 4-star hotel in the historic center of Seville. Staying in this luxury hotel grants lifelong memories of Seville.

Seville is aristocratic, but Granada is arty.

Arty and bohemian Granada is located in Darro Valley in the foothill of the legendary Sierra Nevada.

Granada was the last bastion of the Arab caliphate. It is home to the Moorish masterpiece of Alhambra Palace and Generalife Gardens.

Although the Alhambra Palace is the most visited site in Spain, Granada is not only about the Alhambra. Granada is also celebrated old Arabic quarter of Albayzin, popular caves of the gypsy quarter of Sacromonte, charming narrow cobbled streets, cozy Andalusian tapas bars, and much more!

Best things to do in Granada Spain:

Where to stay in Granada:

Historic Cordoba was the capital of Moorish Spain.

Today Cordoba is one of the most beautiful cities in southern Spain. In fact, Cordoba is a historic gem in Andalusia with a supreme romantic vibe.

Cordoba is one of the top Andalusia destinations!

Cordoba is the home of world-renowned Mezquita-Catedral, a must-see in Spain. When you see La Mezquita, the UNESCO World Heritage Site in Cordoba, you have to be in awe of it. Medieval Cordoba was praised for religious tolerance between Muslims, Jews, and Christians.

Wandering Juderia, the Old Jewish quarter in Cordoba, and admiring patios along Calleja de las Flores (Alley of the Flowers) in Juderia is a special delight. Visiting Alcazar de Los Reyes Cristianos palace with gardens and walking the historical Roman Bridge over the Guadalquivir river means going back to medieval times in a glimpse of an eye.

The best time to visit Cordoba is May when Fiesta de Los Patios (the annual Courtyard Festival) happens. During the festival, Cordobese patios filled with blooming geraniums are open to the public, while streets in Cordoba are all filled with flowers’ scents.

Cordoba should be on any list of cities to visit in Spain!

Things to do in Cordoba:

Where to stay in Cordoba:

Cadiz is a marvelous Andalusian city on the Atlantic ocean with a breathtaking seafront promenade.

Cadiz is the oldest city in Spain. But, above all Cadiz is one of the most beautiful south Spain cities.

Cadiz is one of the best places to visit in Southern Spain for great seafood, pretty beaches, and friendly people.

For history buffs, let’s say that Cadiz was founded by Phoenicians 3.000 years ago and is the oldest continuously inhabited city in Western Europe. Worth mentioning as well, the first constitution of Spain called La Pepa was established in Cadiz in the 19th century.

To be in Cadiz means to enjoy long walks along the Cadiz seafront, indulge in great Spanish seafood in traditional Andalusian taverns, or hang out with locals at the central market (Mercado Central) while tasting fresh local food.

Things to do in Cadiz:

Where to stay in Cadiz:

Jerez is the heart and the essence of Andalusia.

Jerez is the perfect place to indulge in authentic sherry wine and some extraordinary mouthwatering tapas bites in old sherry stores called ‘tabancos‘ where wines go directly from the barrels to your glass. Take ‘ruta de tabancos‘ for an authentic sherry experience! Jerez is one of the best places to visit in Spain in May when  Feria del Caballo, the annual fair of flamenco, sherry wine, and Andalusian horses takes place.

Unquestionably, Jerez is one of the most authentic cities in southern Spain and one of the unique places to visit in Spain.

Things to do in Jerez:

Where to stay in Jerez de la Frontera:

Ronda is the most spectacular and dramatic Andalusian town sitting on the cliff above the El Tajo gorge.

Ronda is the birthplace of bullfighting with the Plaza de Toro, the oldest bullring in Spain. Ronda is one of the most picturesque towns in Andalusia and one of those unforgettable must-see places in Spain. The impressive Puente Nuevo bridge over the gorge and Banos Arabes, one of the best-preserved Arab Baths in  Andalusia, are sites not to be missed in Ronda.

Ronda has been especially loved by writers, artists, and alike. Just to say, Ernest Hemingway and Alexander Dumas praised the beauty of Ronda.

I strongly recommend checking out Ronda by yourself on your southern Spain vacation!

Things to do in Ronda Spain:

Where to stay in Ronda:

Iznajar is an unspoiled, traditional whitewashed, and red-roofed hilltop village in Cordoba Province in Andalucia.

It is one of the most beautiful villages in Southern Spain with gorgeous views of 32 km long Iznajar lake, the largest lake in Andalucia. Even more, Iznajar is an entrance to Sierras Subbeticas Natural Park. If you want to see a genuine whitewashed and off-the-beaten-track Andalusian village, you should unquestionably put Iznajar on your itinerary. Especially if you are an outdoor lover. You can swim, sail and do some other water sports on Valdearenas Beach on the Iznajar lake.

Things to do in Iznajar in southern Spain:

Where to stay in Iznajar:
MID-RANGE: Casa Las Tinajas – is a lovely small hotel with a gorgeous patio and a seasonal pool near the center of Iznajar. The cozy hotel is renovated in a mix of traditional and modern styles.

Arcos de la Frontera is one of the most beautiful traditional Pueblos Blancos (white towns) in southern Spain sitting on a huge plateau with typical Andalusian narrow and steep streets.

Along with Ronda, Arcos de la Frontera is one of the most dramatically situated towns in Andalusia. And it is only a short drive from Ronda too. This fairy-tale hilltop town offers one of the best views of the awe-inspiring Andalusian countryside.

Things to do in Arcos de la Frontera:

Where to stay in Arcos de la Frontera:

If you are after authentic Pueblo Blanco in a supreme natural setting, you should head to Ubrique. Visitors of Ubrique probably would never guess, but this rather sleepy and utterly beautiful Andalusian town is world-renowned for the leather industry supplying Hermes, Chanel, Louis Vuitton, Gucci, and other world’s top designers.

A street in Ubrique in Andalusia © World Travel Connector

Ubrique on the south of Spain © World Travel Connector 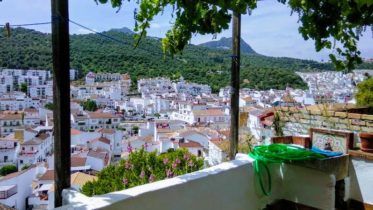 A view of Ubrique in Andalusia © World Travel Connector 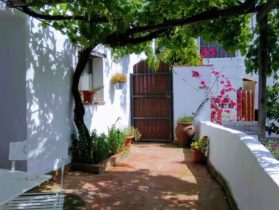 Malaga is the capital of Costa del Sol and the birthplace of Pablo Picasso.

Malaga proudly holds more than 30 museums, among which Museo Pablo Picasso is probably best known. For striking views of Malaga, head to the 11th-century Gibralfaro Castle and Moorish fortress of Alcazaba.

But Malaga is also one of the best destinations in Spain for foodies. If you want to make the most of your holidays in Malaga, visit one of the numerous Michelin star restaurants, traditional tapas bars, and upscale cocktail bars in Malaga.

Best things to do in Malaga:

Where to stay in Malaga

MID-RANGE: Hotel Eurostars Málaga, – is a 4-star hotel with spacious and modern rooms in Malaga. The hotel is within a 5-min walk to Malaga train station and a 20-min walk to the city center.

MAP OF BEST PLACES TO VISIT IN SOUTHERN SPAIN

The best way to visit all these places in Andalucia is to take a road trip. If you are interested in how to visit them all in one trip, you should read: The Ultimate Southern Spain Itinerary

Amazing Spanish Seafood That Will Make You Crave For More