STEPS AND TRAVEL RESOURCES FOR YOUR PERFECT TRIP

If you are looking for a well-balanced and not fast-packed southern Spain itinerary you have found the right post.

While I have spent a month traveling south of Spain, many people have only several days of their vacation to spend on a trip. That’s why I have tailored a perfect itinerary for southern Spain for first-time visitors covering the highlights of southern Spain and at the same time giving much time to leisurely enjoy the best of Andalusia.

In this post, you’ll find the perfect Andalucia road trip itinerary regardless of if you are planning to rent a car or use public transport.

The best way to explore the south of Spain is by renting a car as it gives you the freedom to see the countryside at leisure without depending on trains and buses, although the public transport system in Spain is great if you would prefer not to drive.

This 10 days Andalucia road trip is a round trip that starts and finishes in Malaga.

Sunny Malaga is the capital of Costa del Sol. It has the biggest airport in southern Spain.

Malaga airport is the 4th busiest airport in Spain (following only Adolfo Suárez Madrid-Barajas Airport, Barcelona El Prat Airport, and Palma de Mallorca Airport by traffic).
Thus, logistics-wise, the best is to start and finish a southern Spain trip in Malaga. In other words, most likely you will find the most affordable plane tickets to Malaga.

Things to do in Malaga:

Start your visit to Malaga by having a cup of coffee and a glass of fresh juice at Mercado Central de Atarazans before the official start of sightseeing Malaga.
Vibrant Mercado Central de Atarazans is one of the top places to see in Malaga. It is a fabulous food market filled with great food products, small restaurants, and cafes. Another popular place in Malaga for sipping morning coffee is Café Central Málaga.

After a cup of morning joe head up to Castillo Gibralfaro, the famous Malaga hilltop castle, for the spectacular views of Malaga. After admiring the views of Malaga from the hill, go down the hill to Alcazaba (a fantastic medieval Moorish palace with amazing sea views).

Just to remind you, Malaga is the birth town of Pablo Picasso, one of the most famous painters of all time. So, please take the time to visit the amazing Picasso Museum.

When you finish visiting the Picasso Museum, most likely it’s going to be lunchtime already.

I would recommend having lunch at the iconic El Pimpi tapas bar. After lunch, enjoy your Spanish siesta time.

In the late afternoon have some beach time on sandy Malagueta beach. After all, you are on Costa del Sol and Malaga is the capital of Costa del Sol.

Malagueta beach is especially loved by locals. It’s the nearest beach to Malaga center and one of the best beaches in Malaga.

If you wonder what to eat in Spain and you want to eat authentic famous Spanish food on your trip, read Popular Food in Spain You Need to Try

This is a summary of the MALAGA ITINERARY:

In the early morning on the second day, head to Granada. The distance between Malaga and Granada is only about 30 km (19 mi).

Related read: 15 Essential Tips and Tricks on How to Visit Alhambra Palace

Tip: For roaming Alhambra palace, cobbled stone streets of Granada, and hilly Albaicin, you will need comfortable walking shoes. If traveling in summer, check out my list of top comfort women’s sandals for walking.

On the third day, head from Granada to Cordoba and make a stop in Iznajar.

Iznajar is one of the most beautiful white villages in southern Spain with an outstanding hilltop setting overlooking Iznajar lake. If you want to see an authentic Andalusian village, this is a place to visit.

The distance between Granada and Iznajar is about 90 km.

The next stop on this south of Spain itinerary is Cordoba.

After visiting Iznajar head to Cordoba. The distance from Iznajar to Cordoba is about 130 km.

Cordoba was once the capital of Muslim Spain and a major center of medieval Europe. A mix of beautiful settings on the river Guadalquivir and some extraordinary historic treasures gives a special romantic vibe to Cordoba. La Mezquita (the Mosque-Cathedral of Córdoba) is without any question one of the most fascinating architectural masterpieces in the World.

When you reach Cordoba, most likely noon will be already.

Check-in at your stay and head to the picturesque Old Jewish Quarter (el Barrio de la Juderia de Cordoba) for lunch and stroll around world-famous Corodobese patios and afterward visit Alcazar Palace of Cordoba (one of the main residential palaces of Isabella I of Castile and Ferdinand II of Aragon).

Seville is the next stop on this South Spain itinerary.

The distance from Cordoba to Seville is about 145 km.

2 DAYS IN SEVILLE ITINERARY WITH THE BEST THINGS TO DO IN SEVILLE:

After Seville, Cadiz is coming next in your Andalusia itinerary.

The distance from Seville to Cadiz is about 120 km.

Cadiz is my favorite place in Andalucia.

Why? Because of the people. Simple as that.

You will meet the friendliest people of southern Spain in Cadiz.

The more I travel, the more places with welcoming and open-hearted people capture my heart. Architectural masterpieces and fascinating nature are always on my itinerary. But what keeps me longer in one place are good-hearted people.

And Cadiz is one of the places like that. In Cadiz, you will meet cheerful and easygoing people, smiling, chatting laud, laughing spontaneously, and always ready to help a stranger in need. ‘Joie de vivre’ of Cadiz is unparalleled!

But don’t get me wrong, Cadiz is not only about friendly people. Cadiz is also about great beaches and exceptional seafood.

If you happen to travel to Andalucia during the snail season, you should give a try to caracoles tapas in Cadiz.

Most likely you are going to be surprised how tasty they can be. Like I was! You can read more about it here Eating Snails in Spain.

Because of the friendly people, great food and excellent beaches, I would suggest planning to stay at least 2 days in Cadiz.

After some seaside time, you are heading to the inland south of Spain. Typical Andalusian white villages are next on your Andalucia itinerary.

The distance from Cadiz to Jerez is about 37 km.

Things to do in Jerez: watch equestrian ballet at the Royal Andalusian School of Equestrian Art, taste authentic sherry in Jerez (from light and dry sherries such as Manzanilla and Fino to as darker and sweeter sherry such as Oloroso), sample wines and popular local tapas in traditional ‘tabancos‘,  tour the cellars of González Byass or bodega Tío Pepe for authentic sherry tastings, visit the Yeguada de la Cartuja stud farm near Jerez

If you’re traveling to Andalucia in May, then the Feria del Caballo (the Horse Fair) is a must-see! There you will get a feeling of stepping back in time and you will see Andalusia at its best: Andalusian women wearing traditional flameco dresses – colorful ‘rajes gitanas’ or ‘gypsy dresses’, flamenco singing and dancing in noisy public ‘casetas’, Andalusian horses parade …

Distance from Jerez to Arcos de la Frontera is 35 km.

Best things do to in Arcos de la Frontera: stroll the narrow picturesque streets of this breathtaking Andalusia white town, head to the viewpoint of Mirador of the New rock for striking views, visit Casa del Conde del Aguila built in the late Gotic and Mudejar style.

If you travel by car, I suggest visiting Ubrique also. There’s no direct bus line from Arcos de la Frontera to Ubrique. Ubrique is a typical whitewashed Andalusian town situated in between two nature parks. If you are a nature lover, the Ubrique area is a place to see in the south of Spain. If you are traveling by car you can enjoy scenic views on your way from Arcos de la Frontera to Ubrique.

The distance from Arcos de la Frontera to Ronda is about 90 km.

The next stop on your Andalucia trip itinerary is Ronda, one of the most spectacular towns in Southern Spain. Ronda might be a small town by size, but the atmosphere is world-class. If you like small towns with a spectacular countryside setting, most likely you will fall in love with Ronda. Ernest Hemingway and Orson Wells did. Even more, cremated remains of Orson Welles and his beloved Paola Mori have dispersed down a well on a small country estate on the outskirts of Ronda.

“There is one town that would be better than Aranjuez to see your first bullfight in if you are only going to see one and that is Ronda. That is where you should go if you ever go to Spain on a honeymoon or if you ever bolt with anyone. The entire town and as far as you can see in any direction is romantic background..” – Ernest Hemingway noted about Ronda.

🏨 Where to stay in Ronda: have your ‘honeymoon’ night in Parador de Ronda (⭐⭐⭐⭐) with a spectacular location on the edge of the gorge and breathtaking views!!!

Depending on your flight time, you can go directly to Malaga Airport, stay on the last day in Malaga, or even take a day trip from Malaga to Gibraltar. (Read more here: Best things to do in Malaga, Spain)

The distance from Ronda to Malaga is about 103 km.

MAP OF THE SOUTHERN SPAIN ITINERARY

The best time to visit Andalucia is spring and autumn. In the summer months (June, July, August) temperatures in Andalucia go above 40ºC with hardly bearable heat. Pleasant temperatures to travel southern Spain are from February to May. May is a great month to go to Andalucia as some greats festivals happen at that time. And Holy Week in Andalucia is another level.

The best months to take the Andalucia road trip are the spring months (March, April, May) and autumn months (September, October, and November). 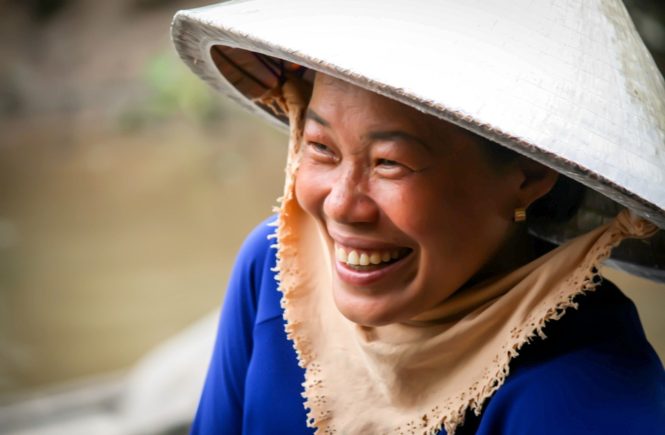 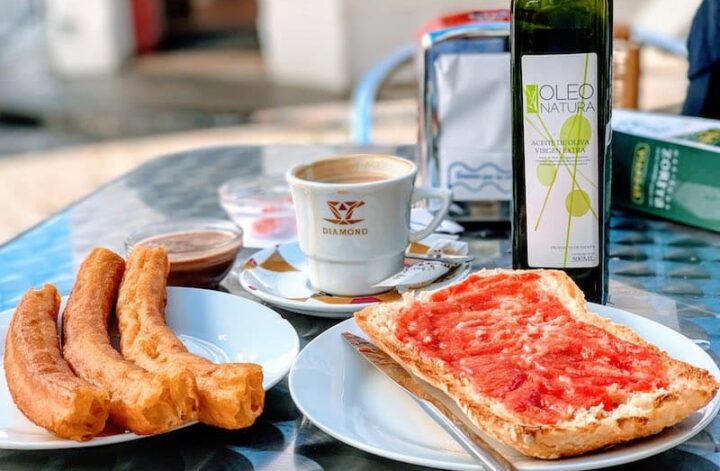 14 Traditional Spanish Breakfasts in Spain to start your day with